Use Preferences to change the theme

Thank you for silencing your phone 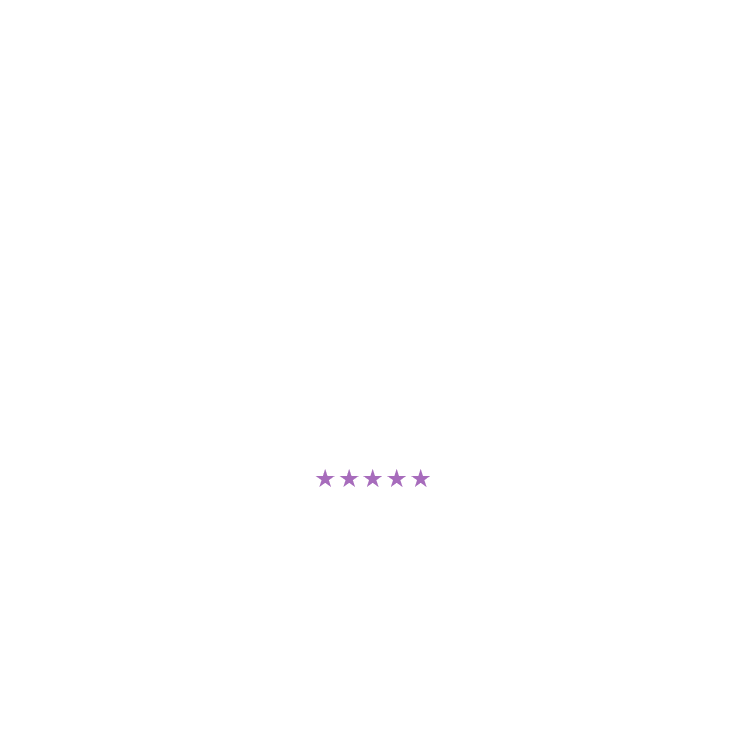 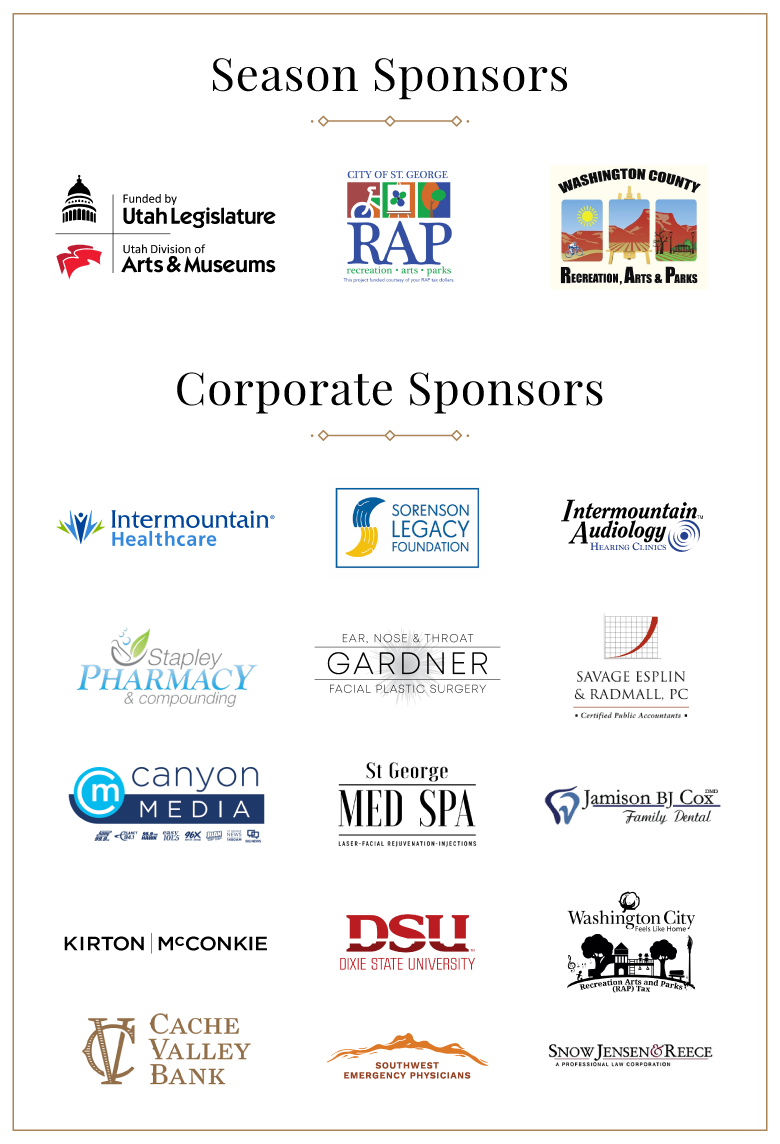 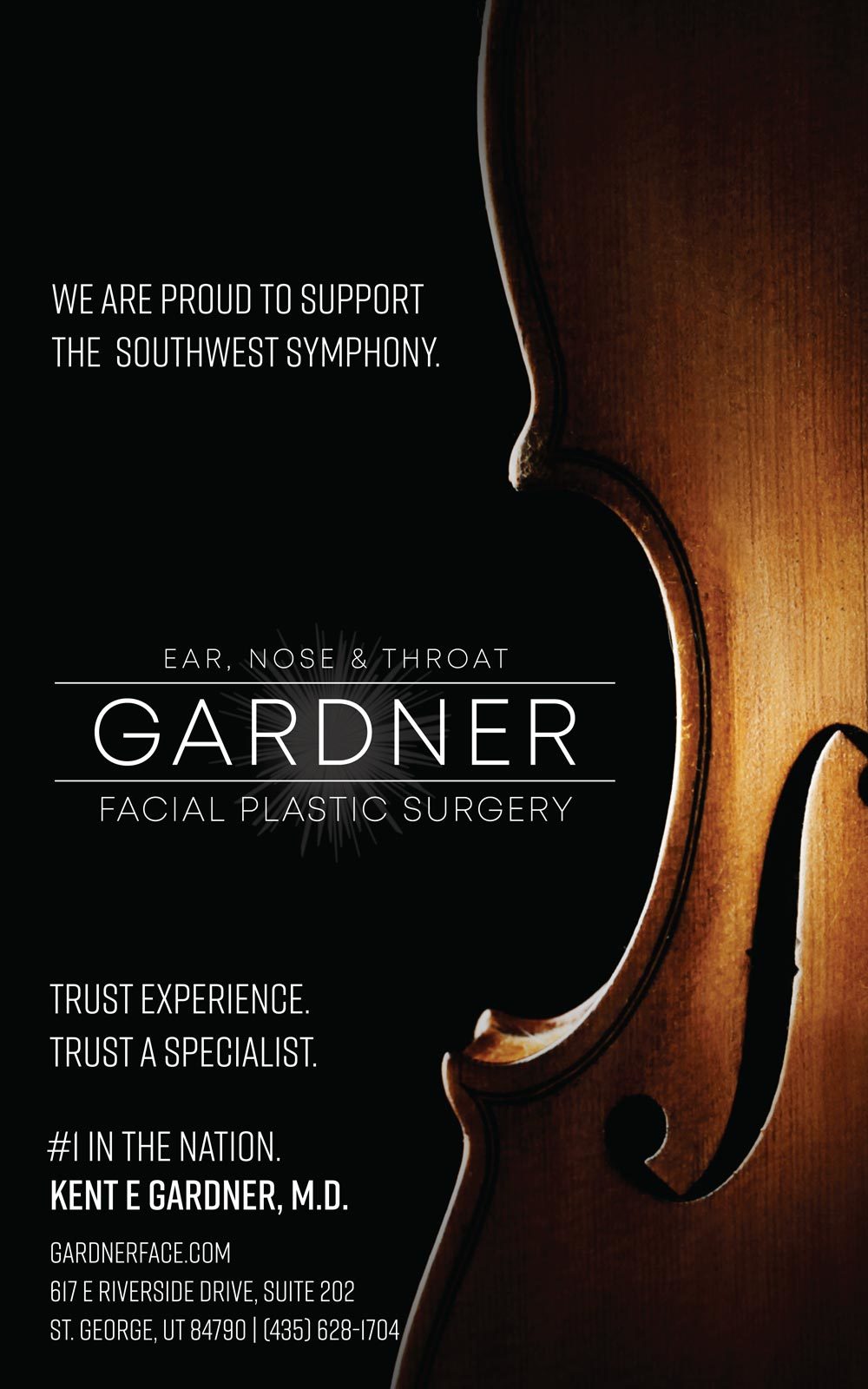 Symphony Under the Stars

Fanfare for the Common Man 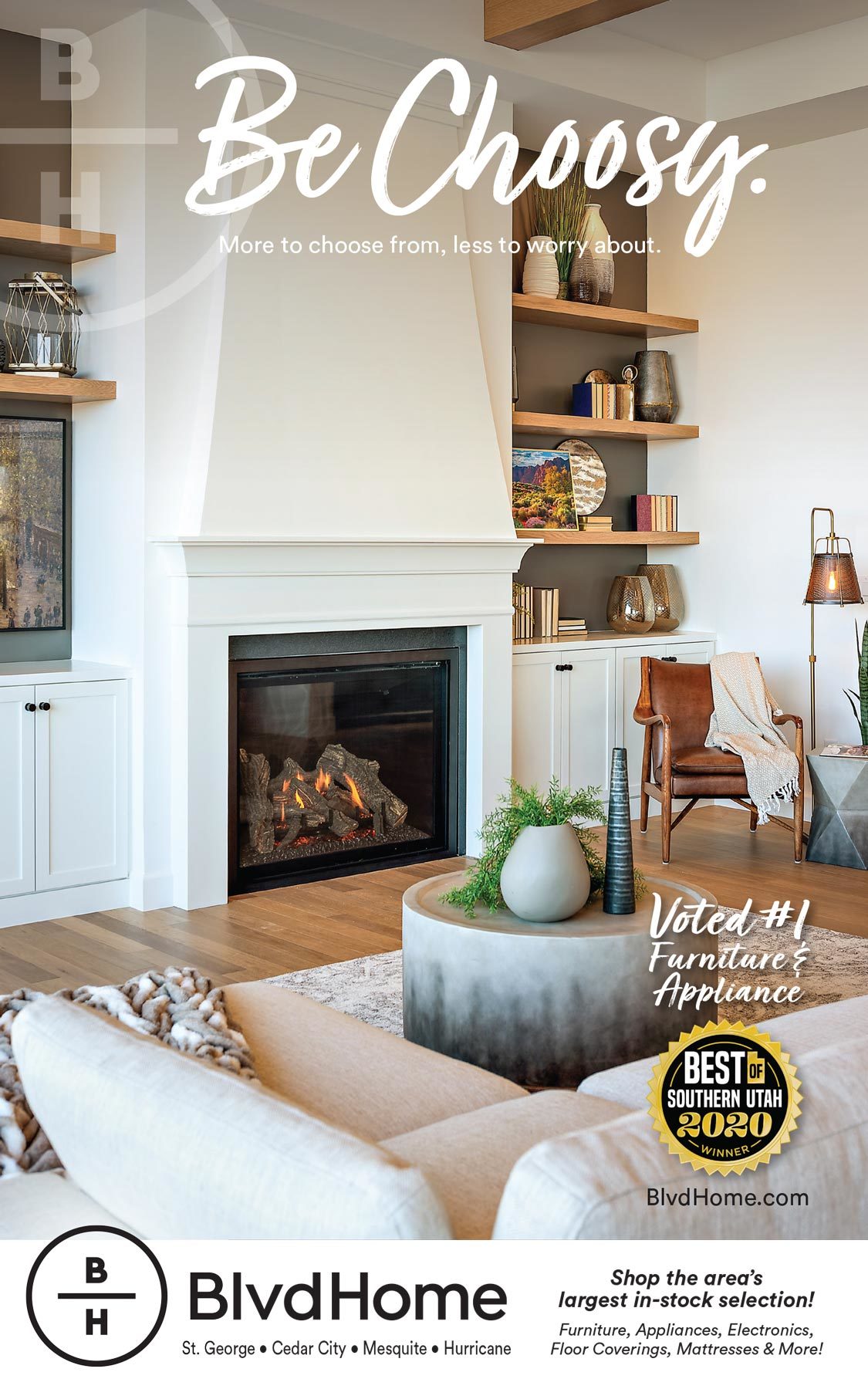 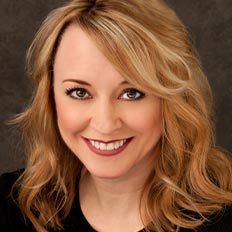 Happy 40th anniversary Southwest Symphony! What an amazing 4 decades it has been filled with inspiring music. I am personally honored to have been a part of the symphony for almost 10 years both as a violinist and administrator. This legendary group of dedicated music professionals has tirelessly volunteered their time, resources and energy into keeping music alive in our community. There's no doubt - there is no substitute for live music.

We now have a unique opportunity to pledge our sustaining support. I invite you to become a friend of the symphony and give whatever you can. Your donation is critical to our future now more than ever. There are many ways to give including the 40 for 40 Campaign or through the Crescendo Club. Every dollar makes a difference. All the details can be found on our website at swsutah.org.

Please don't hesitate to reach out to me if you have questions about the symphony, you would like to become a donor, or maybe you just want to chat about your favorite composer. We are here to serve our community and we deeply appreciate your support as we continue to bring YOU music that enriches and brings joy to your life.

Here’s to another great 40 years! 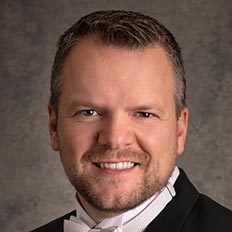 Lucas Darger returns for his fifth season with the Southwest Symphony. The Symphony has flourished under his leadership, and his innovative programming and dedication to excellence has resulted in sold-out performances becomes a regularity. Artistry has reached new heights, ticket sales have more than tripled, and the symphony has added to its educational outreach programs, giving free concerts to more than 3000 local elementary children. He has forged new ties within the community, increasing collaborations both in and out of the concert hall with local arts groups as well as other non-profits, and has established a pre-show tradition that allows students and local musicians incredible performance opportunities. He is a passionate conductor and musician and strives to achieve expressive performances that captivate and energize audiences.

Darger began his conducting career when he was just sixteen years old, and has gone on to conduct orchestras across the United States. He earned a Master’s degree in Orchestral Conducting from the University of Iowa, where he studied with the renowned Dr. William LaRue Jones, and he obtained his Bachelor’s degree in Violin Performance from the University of Utah, where he also studied conducting with Dr. Robert Baldwin. Afterwards he was accepted as a fellow at the prestigious Pierre Monteux School for Conductors in Hancock, Maine.

Proud to be a part of the St. George community, Darger serves on the board of the Music Booster Club at his children’s school, coaches football, and serves on the School Community Council. He loves the outdoors and enjoys hiking, mountain biking, skiing and boating.

We are all familiar with the story of the words. Francis Scott Key, a Baltimore lawyer, was working to get a friend released from the British. The friend was being held aboard a British ship during their attack on Baltimore Harbor in 1814. As Key watches the bombardment of Fort McHenry that guards the entrance to Baltimore, he is inspired by the fort holding out against a mighty naval bombardment. That is where the words came from.

Here is the rest of the story. Key wrote a poem, not a song. The poem has a rhythmic scheme, and like much of the music in that day, folks simply chose one of many commonly known tunes to set the poem too. In this case the tune was a popular drinking song—a song where a bunch of guys who had too much ale would sing together to celebrate their slightly inebriated camaraderie. So, a drinking song, “To Anacreon in Heaven”, whose wide range requires you to be slightly loosened by ale to sing, became the tune for our National Anthem.

While musicians are familiar with the composer, most concerts don’t feature a heavy dose of Holst. That is a shame, given the many delightful works he presents us with. Tonight’s work, St. Paul’s Suite, represents an important movement in English music. The turn of the 20th century saw a surge in English Nationalistic compositions, with Holst and the great Ralph Vaughan-Williams leading the revival. Nationalistic music features the tonalities, forms and uniqueness of your native country and Holst and Vaughan William relied heavily on the rich treasury of folk tunes of Great Britain as source material. St. Paul’s Suite is an example of this movement. This work is divided into four sections:

Shostakovich had a long and rocky relationship with his music overlords in the old USSR. Stalin’s vision of a utopia of equality and justice could only be achieved when the government controlled individual behavior, thoughts, and actions. This was especially hard on the artists in the Soviet Union who wanted to join the early 20th movements to experiment with tonalities and musical forms. Shostakovich had several clashes with the “music police” of the USSR over his lifetime, and somehow, miraculously survived Stalin’s vicious house cleaning (purges) of the 1930’s. Some say his most popular work, the 5th Symphony, was an offering to the conformity his system demanded.

The Waltz Number 2 is not from that earlier, dystopian time period. Rather, it represents a freer artistic atmosphere in later Soviet history. With Stalin under the glass, the 1950s saw a multitude of new works from Shostakovich. The Waltz is part of unpublished material from the late 1950s that was originally written as part of a film score. Later orchestrated for a variety of musical ensembles, this delightful piece of music gives you a taste of mature and playful Shostakovich. Originally—but incorrectly—considered part of a Jazz inspired suite, this work is actually part of his Suite for Variety Orchestra, and features a wonderful saxophone introduction to the main Waltz melody.

Outside of theological and figurative models of thinking, the idea of “immortality” becomes problematic. If you need proof that something can live forever, the opening of Brandenburg Concerto #3 is the proof. This opening theme is so ingrained in our culture, you may be hard pressed to remember where you first heard it…. a cartoon...a concert...a commercial…. or even a movie as a part of the soundtrack. Regardless of where, those that have any cultural connection to the Western tradition will immediately recognize that Bach still speaks 370 years after his last mortal breath. Now, that is immortality!

There are three movements to this short work:

Fanfare for the Common Man

There are two pieces by the great American composer, Aaron Copland, on the program tonight. The first is Fanfare for the Common Man. Copland, in his autobiography, wrote of the request:

"Eugene Gosens, conductor of the Cincinnati Symphony Orchestra, had written to me at the end of August about an idea he wanted to put into action for the 1942–43 concert season. During World War I he had asked British composers for a fanfare to begin each orchestral concert. It had been so successful that he thought to repeat the procedure in World War II with American composers".

A total of 18 fanfares were written at Gosens' behest, but Copland's is the only one which remains in the standard repertoire.

The percussion startles the listener—something important is coming—and this is followed by unison trumpets announcing a heroic theme. French horns join in a restatement with harmonization-still very clear and simple, but hinting at complex things to come. In the next reiteration of the theme, trombones harmonize the opening statement, followed by the entire brass choir joining in a rich, harmonized fourth statement of the simple opening theme. In a twist, Copland then migrates to a new, uplifted key as if to express hope for victory and a new future to end the piece.

If movie scores are the new home of classical composition, then John Williams is king of this genre. While “Jaws” was the first international soundtrack hit for John Williams, it is his long association with the Star Wars universe that helped give all of the stories shape and life. If you have never seen Star Wars, enjoy Williams’ classical expertise creating melody, develpement, and then using rich orchestration to evoke mood. Additionally, throughout the Star Wars series, Williams uses the musical technique of the “leitmotif”, associating identifying musical themes with characters or events that are used as musical reminders in other parts of the story. This relationship between doomed lovers, Anakin and Padme, is one of those leitmotifs. This arrangement is one of many standalone orchestral renditions that Williams has created for the concert hall from his movie scores.

Rodeo represents one of Copland's many wartime compositions. Joining Fanfare for the Common, Billy the Kid and Appalachian Spring, Copland is setting out to remind us of the energy and resilience of the American character. No matter what Americans are faced with, they can overcome challenges and make a better world.

Hoedown is from a Ballet Suite: music that was used for a ballet that has been arranged for orchestral presentation. The hoedown is the western dance that ends the day long of rodeo competition. This short excerpt from the ballet suite is the orchestral personification of energy. The fast moving, raucous theme presented in fiddles and winds brings to mind a picture of the energetic cowboys and cowgirls dancing away. The almost frantic opening theme is contrasted with intermingled, contrasting material. Much like the classical Rondo form, this opening theme comes back again and again. Copland uses his characteristic orchestration: open melodic fourths and fifths, combined with his own unique interpretation of American fiddle technique, to evoke the dance. Check your spurs at the door and don’t be too rambunctious! 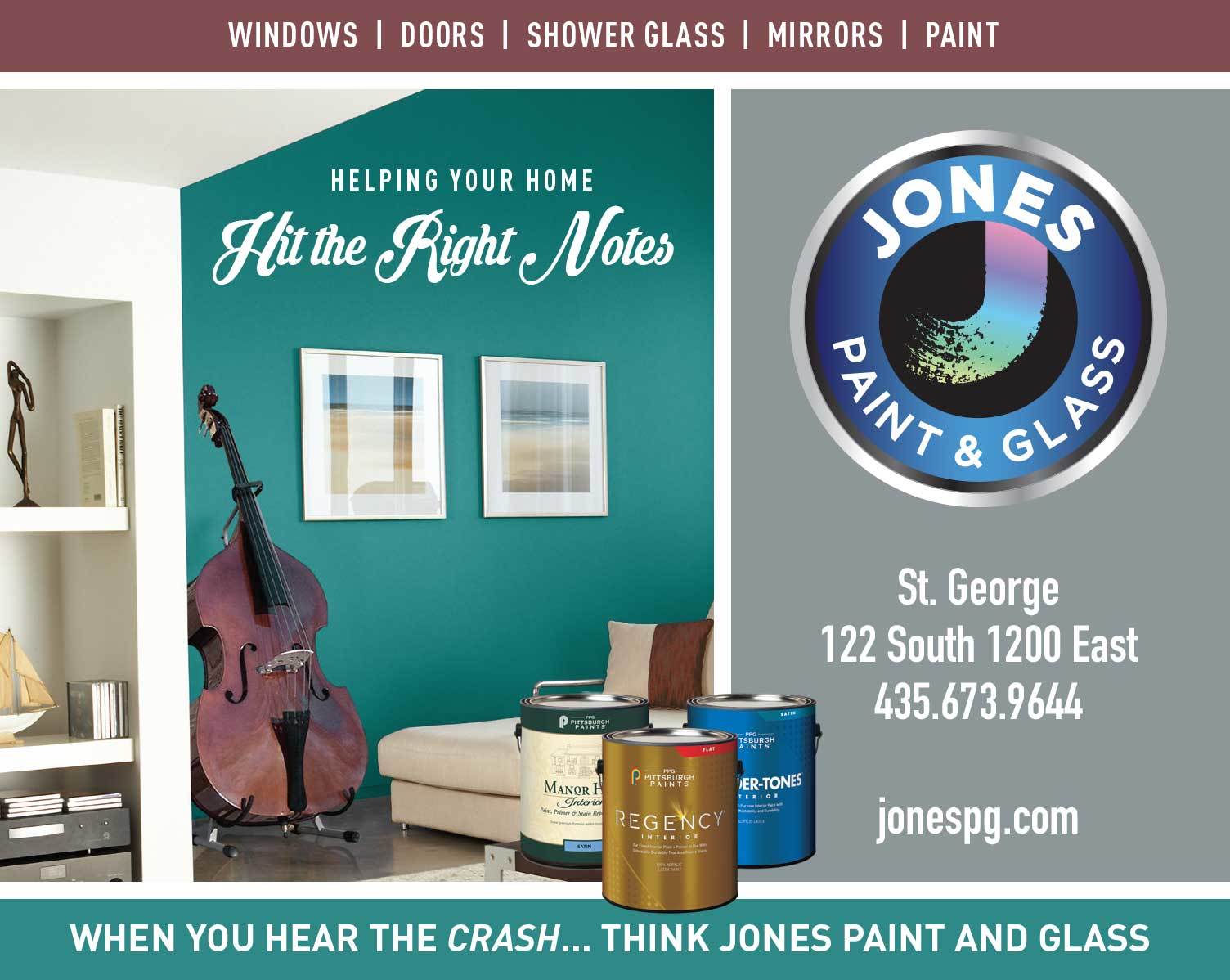 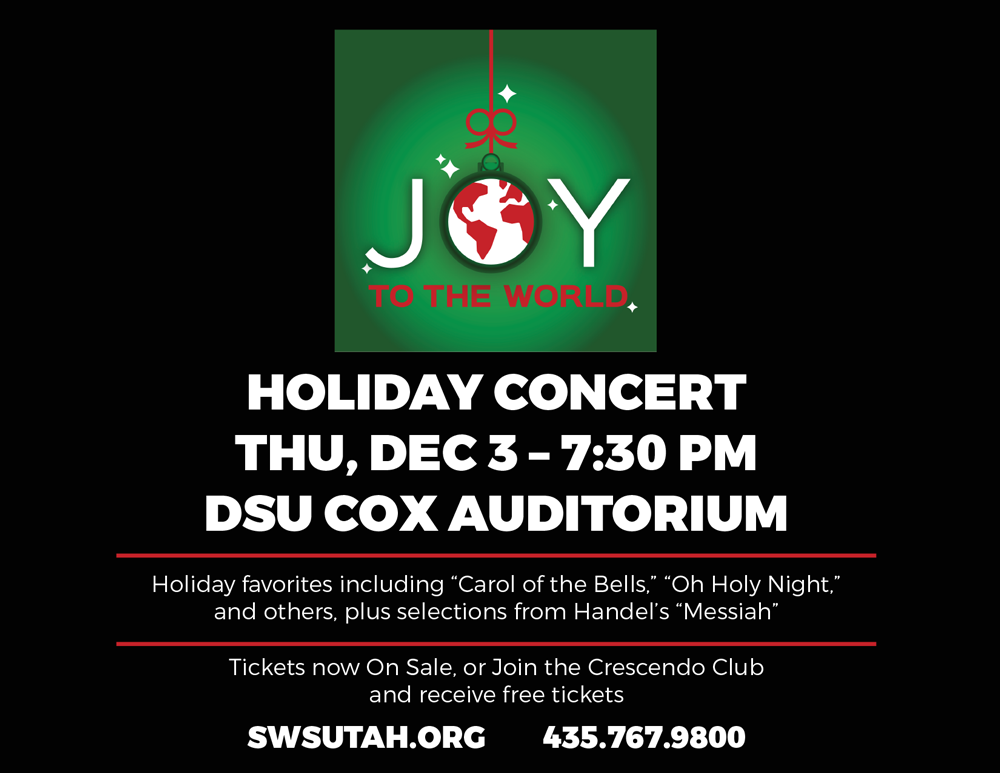 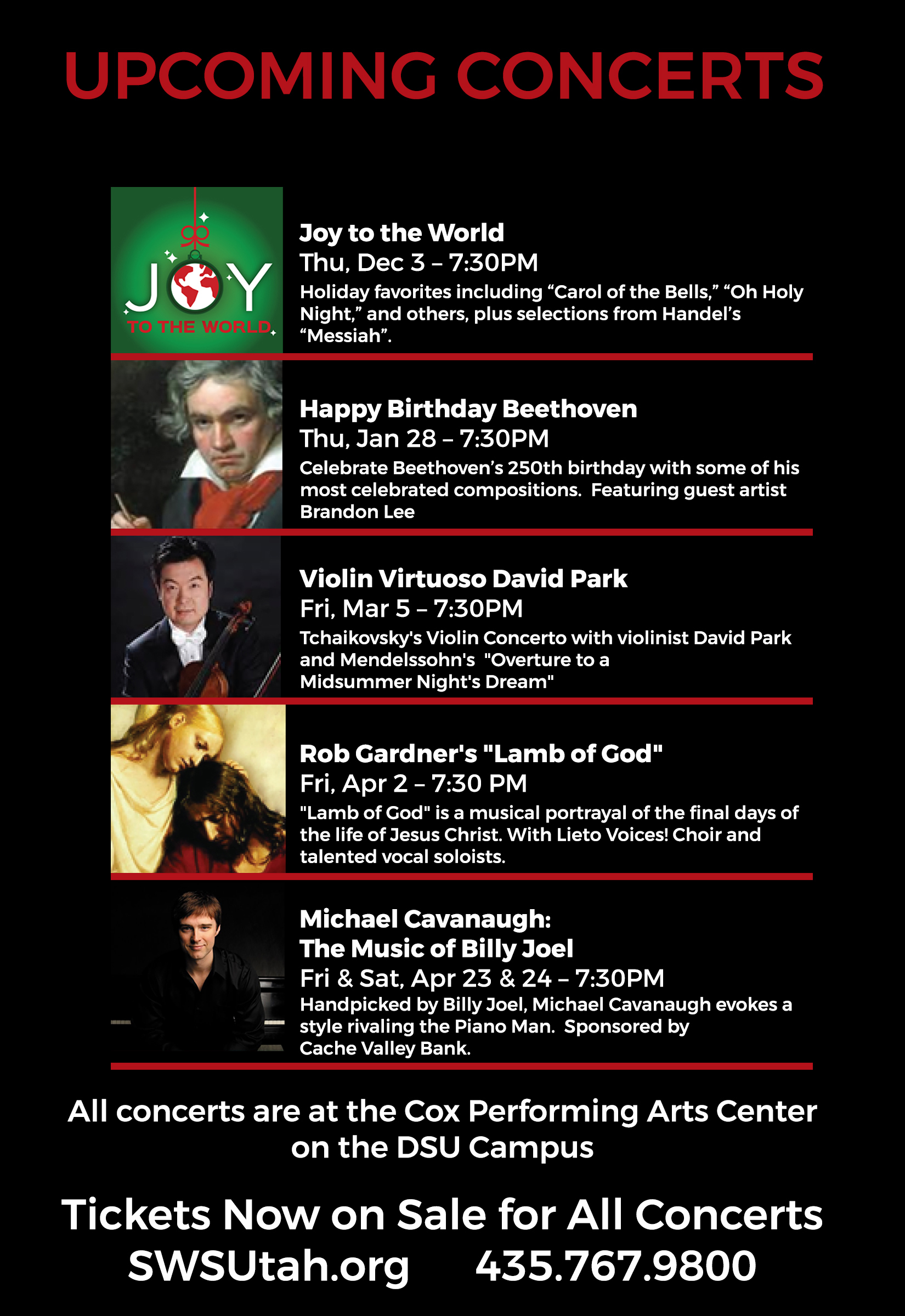 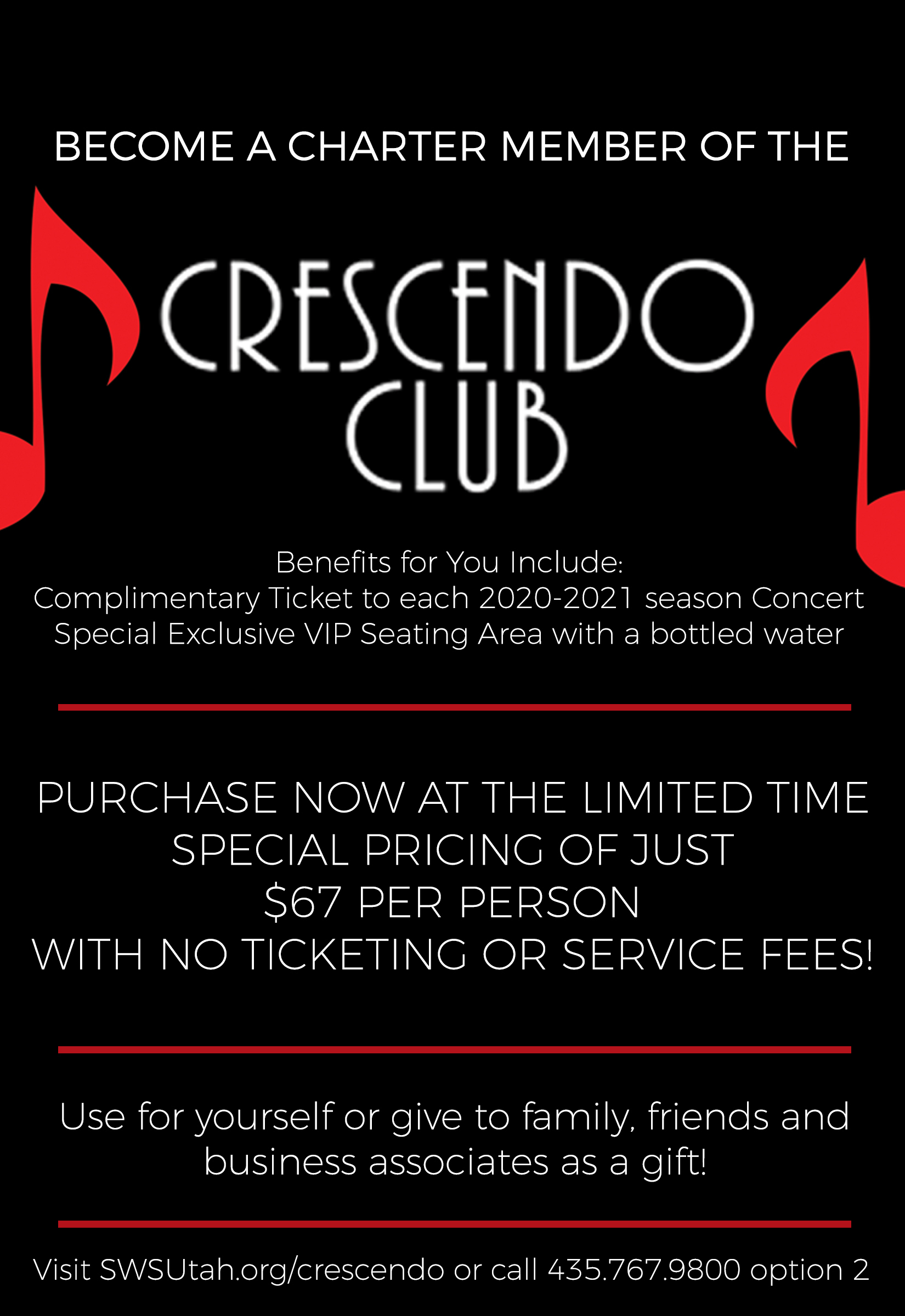 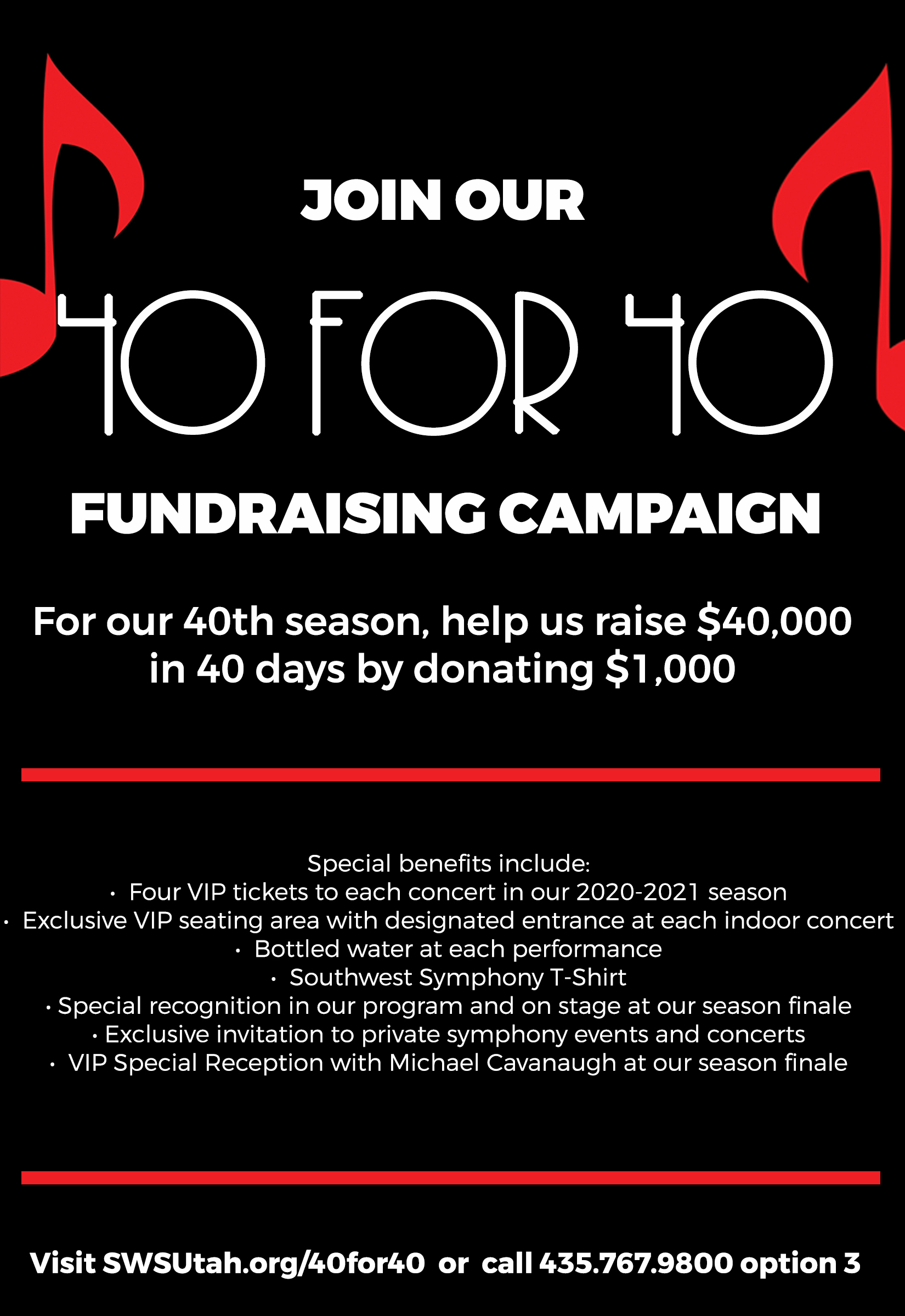 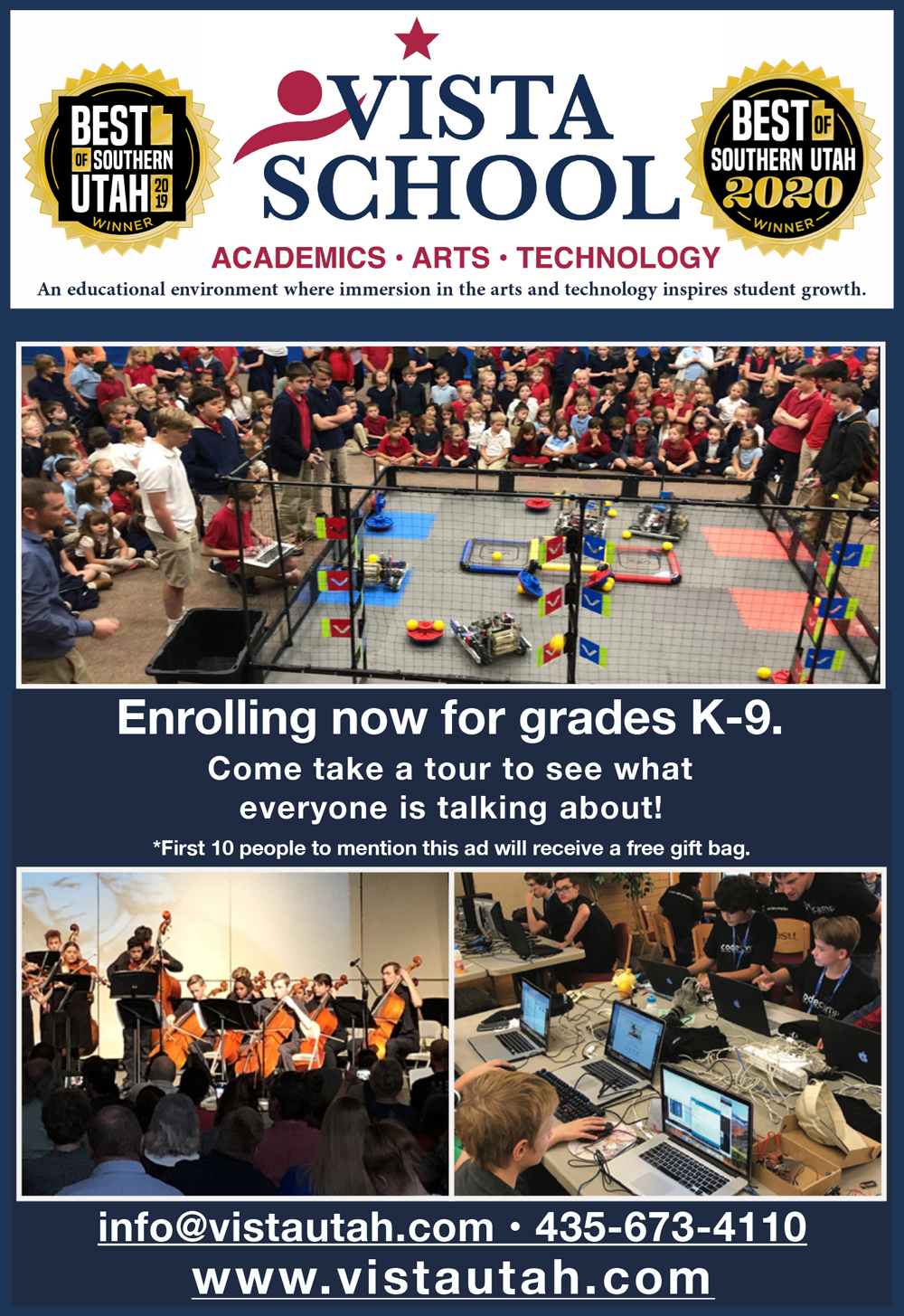 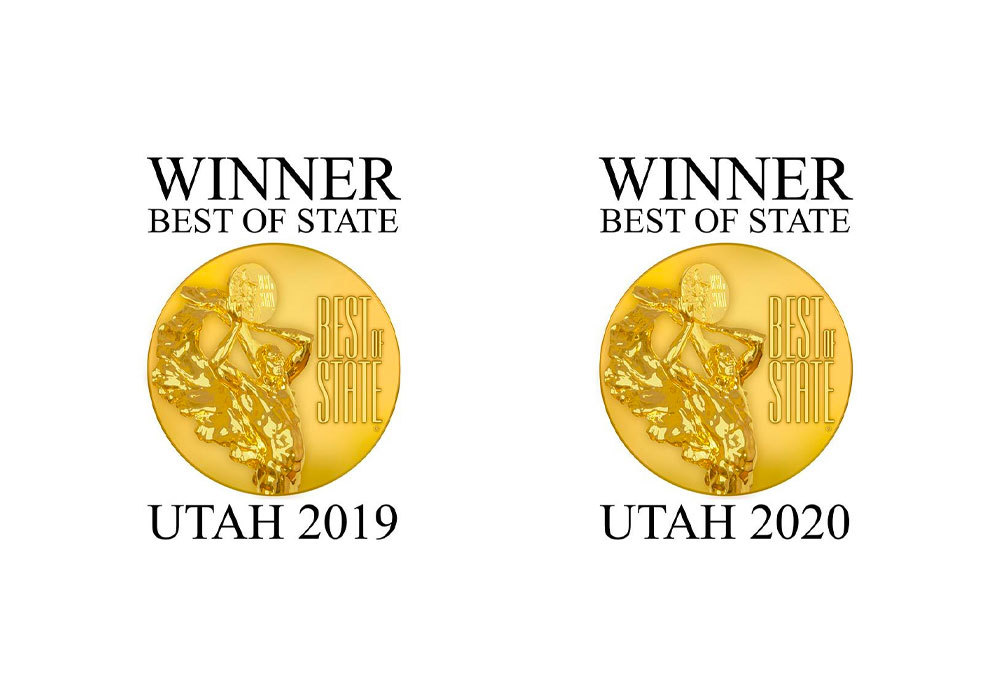